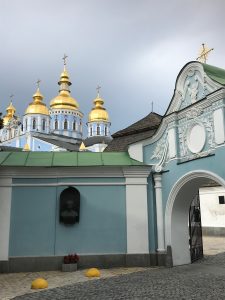 This blog is a part of our Ukraine series – written and researched by Michael Howard. You can read the previous post here.

On 4 November, media reported the passing of 33-year-old anti-corruption activist Kateryna Handzyuk, who three months earlier had been horrifically injured in an acid attack in the city of Kherson in southern Ukraine. Thousands of activists like Handzyuk are resourcefully and courageously fighting corruption in Ukraine. Who are they? What are they doing? And have they been successful?

The important role of civil society in Ukraine

In June this year, around 350 people gathered at the MezhyhiryaFest in Ukraine, an event dedicated to the recovery of state assets stolen during the presidency of Viktor Yanukovych. Mezhyhirya is the outrageously lavish and luxurious former residency of Yanukovych built with state funds that has become a symbol of his corrupt rule. The participants included anti-corruption campaigners, investigative journalists, MPs, the head of Ukraine’s asset recovery and management agency (ARMA) and representatives of the prosecutor’s office.

This event, which is organised by civil society groups and has been running for several years, speaks of the prominent role that the third sector has played in the Yanukovych asset recovery campaign and the wider drive for reform. According to Freedom House, “Civil society remains the strongest element in Ukraine’s democracy … [it] is playing a crucial role in driving reforms aimed at building functional democracy and the rule of law.”

Civil activists in Ukraine, though lacking resources, provide oversight of business and political leaders that the government does not. Anti-corruption campaigners range from part-time volunteers to professional investigative journalists.

“Kantselyarska Sotnya” (“The White Collar Hundred”) is an NGO that coordinates numerous anti-corruption related projects that rely on the help of volunteers. For example, thousands of volunteers have helped to restore documents shredded by Yanukovych and his associates when they fled the country. “The White Collar Hundred” has also worked together with the NGO Anti-Corruption Action Centre, the State Monitoring Service of Ukraine and Ukraine’s Ministry of Justice to create a register of politically exposed persons in Ukraine.

The initiator and creator of “Kantselyarska Sotnya”, Denys Bihus, is one of the leading figures in the fight against corruption in Ukraine. He heads TOM 14, a group of professional investigative journalists and founded the popular TV show “Nashi Khroshi” (“Our Money”) that exposes corruption at the highest levels (see Bihus.info).

One investigator who has played an important role in the Yanukovych asset recovery campaign is Anna Babinets. She and other investigators have continued to shine a light on the political and business elite who are undermining this process. A recent investigation in which Babinets was involved allegedly obtained evidence of collusion between the old and the new regime. Specifically, video and audio recordings of a meeting between Eduard Stavitsky, Yanukovych’s Minister of Energy and the Coal Industry, and two General Prosecutor deputies in Israel.

While the growing strength and organisation of civil society in Ukraine is a positive development there has been some criticism of anti-corruption campaigners. Activists and the government are at loggerheads over the issue of corruption. According to a recent study, the former regularly accuse the government of obstructing reforms and acting in the interests of corrupt elites, while the authorities maintain that activists are unrealistic in their expectations, don’t understand how to bring about reform and also focus on the negatives and not the progress that has been made. The constant stream of corruption exposés, the study argues, has led to a complete loss of confidence in the government and apathy amongst the public and is therefore seen as counterproductive.

Another report by Chatham House assessing Ukraine’s progress on corruption reforms, amongst others, advises civil society to focus on communicating positive developments to citizens and supporting reform efforts which will ultimately reduce the space for corruption.

The main obstacle facing civil society is a lack of political will amongst the elites. Ukrainian civil society has been criticised, perhaps unfairly, for not establishing an effective political opposition to the current power groups that are set to retain power after the presidential election in March. It is hopeful, however, that this situation will change. Potential future reformers are being groomed for office such as the three Ukrainians currently taking part in Stanford University’s Ukrainian Emerging Leaders Programme. It is no surprise that one of the three is a prominent anti-corruption activist.