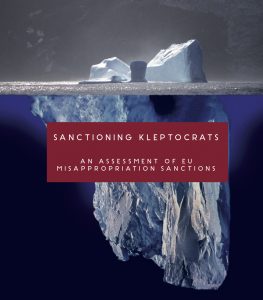 This article is drawn from Clara Portela’s report for CiFAR – Sanctioning kleptocrats: An assessment of EU misappropriation sanctions written for CiFAR’s EU Sanctions Watch project. The blog was initially written for the European Council on Foreign Relations (ECFR) and can be read in full on their website.

Sanctions for ‘misappropriation’ have proved their worth in forging ties with new leaders in Tunisia, Egypt, and Ukraine. But it is time to strengthen them.

Following their Arab Spring ousting, the European Union froze the assets of Presidents Ben Ali and Mubarak and well as those of their family and associates – the first so-called misappropriation sanctions ever imposed by Brussels. Three years later, the EU enacted similar freezes on Viktor Yanukovych and his entourage after his fall from the Ukrainian presidency. The deposed leaderships were all suspected of having stolen large sums of public money while they were in office, and so the new authorities hoped to recover these assets and restore them to state coffers. Brussels put together all three sanctions regimes at the request of the post-revolutionary governments and applied them on list of designees these supplied. Thus, the freezes were enacted in order to prevent asset flight – this is a prerequisite for their subsequent recovery.

The freezes also followed a political rationale: to support the transitions in Tunisia, Egypt, and Ukraine, and help the EU to strengthen ties with the post-revolutionary leaderships. The EU Council agreed the measures as part of a policy of democracy promotion, claiming to freeze the assets of those responsible for misappropriation of state funds and who were thus “undermining the development of democracy in the country”.

Misappropriation sanctions regimes target the funds stolen by corrupt leaders in the hope that they can be restored to the state budget. They differ fundamentally from other sanctions enacted under the Common Foreign and Security Policy (CFSP) in that they are composed exclusively of an asset freeze. Indeed, they constitute the only EU assets freezes unaccompanied by visa bans, which illustrates that they do not aim to stigmatise the ousted leaders as personae non gratae, but rather to contest their ownership of the funds. They are the first EU sanctions to have been imposed against former leaders – bans typically apply to incumbents in power. And they constitute the only examples to date of EU sanctions fighting corruption, as they are intended to facilitate the restoration of public funds stolen by officials. Unlike standard sanctions, they do not intend to seek to compel their targets to change course.

Several years after the enactment of the freezes on the Arab Spring countries and Ukraine, how have these measures fared?